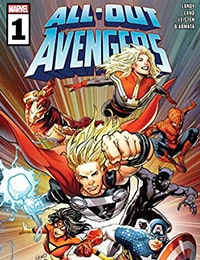 Introducing: the all-new Avengers series that starts in the middle of the explosive action and races to a shocking climax! An alien attack. A missing piece of wormhole tech. A city warped, its citizens transformed into hideous creatures loyal to an Empress from the far side of the universe. And a certain Captain Marvel, looking to her fellow Avengers with murderous intent...Plunge into the action and take a deep breath because you will not be allowed up for air as a thrilling new series kicks off in the strongest, strangest way possible.