In spite of the fact that he claims to be an innocent man, Jared Manx, a convicted multiple murderer, is scheduled for execution at 12:01 a.m. at Blackgate Penitentiary. But, at 7:03 p.m., just short of five hours before Manx will die, Blackgate becomes a part of the Batman titles'' “Cataclysm” storyline. A massive earthquake and its aftershocks rock Gotham City and Blackgate to their very foundations, and the prisoners and the guards, as well as the nun and the attorney who were counseling Manx, find themselves fighting for their lives. Can the Batman save lives and keep villains like Catman, the Cluemaster, Steeljacket, and the KGBeast corralled in this excellent one-shot from writer Doug Moench (Master of Kung Fu) and artist Jim Aparo (The Brave and the Bold)? And what of Jared Manx? Innocent or guilty? And what will become of him in the ruins of Blackgate? 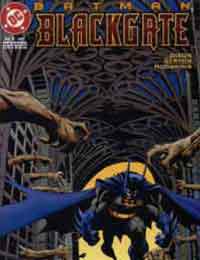