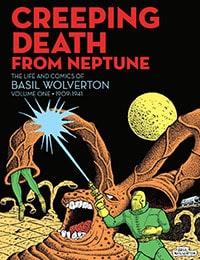 Creeping Death From Neptune: The Life and Comics of Basil Wolverton

Creeping Death From Neptune: The Life and Comics of Basil Wolverton
Follow

This is the first of two volumes reprinting copious amounts of comics stories and recounting the career of cartoonist Basil Wolverton. Based on his correspondence and journals, the biographical portion of the books follows Wolverton from childhood to adult day-to-day life as freelance cartoonist, itinerant handyman, persistent contest enterer, and local pastor of the Radio Church of God. Wolverton lived and worked in the Pacific Northwest, unique among the first generation of comic book pioneers. In the precious period before the industry calcified into a commercial institution, Wolverton was free to work under the radar to explore in detail his weird tales of the future. All of Wolverton''s non-humorous comic book stories will be presented in full, along with prime examples of his humorous comics and dozens of pages of unpublished art, including editorial drawings, advertisements, caricatures, pulp illustrations, rejected comic book covers, and unsold features. It''s remarkable to see art so twisted applied to such vivid pulp tales - almost as though Wolverton was trying his hardest to be Alex Raymond, but couldn''t help turning out images to rival Salvador Dalí. - The A.V. Club.

Creeping Death From Neptune: The Life and Comics of Basil Wolverton
Genres: Suspense