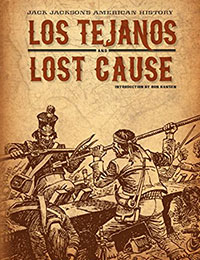 Los Tejanos is the story of the Texas-Mexican conflict between 1835 and 1875 as seen through the eyes of tejano (literally Texan of Mexican, as distinct from anglo, heritage) Juan Seguín. It is through Seguín, a pivotal and tragic figure, that Jackson humanizes Texas'' fight for independence and provides a human scale for this vast and complex story. Lost Cause documents the violent reaction to Reconstruction by Texans. As Jackson wrote, Texas reaped a bitter harvest from the War Between the States. Part of this dark legacy was the great unrest that plagued the beaten but unbowed populace. The tensions caused by Reconstruction are told through the Taylor-Sutton feud, which raged across South Texas, embracing two generations and causing untold grief, and the gunslinger John Wesley Hardin, who swept across Texas killing Carpetbaggers, Federal soldiers, and Indians.