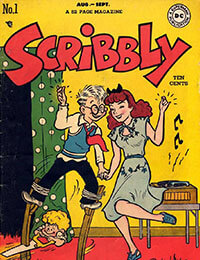 Scribbly JIbbet, the boy cartoonist written and drawn by Sheldon Mayer, received his own title in 1948 after years of appearances in All-American Comics and Comic Cavalcade. Scribbly was the beneficiary of a teen comics boom that also saw the launch of Leave it to Binky. The series still contained Mayer''s work but now focused more on romance and Scribbly''s attempts to get a steady job, with the previously regular guest star (Red Tornado) notably absent from its pages. During the 15 issue run of Scribbly, the character also appeared in Leave it to Binky and Buzzy.