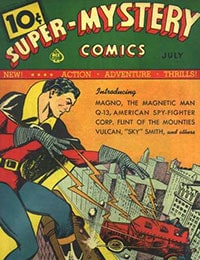 Super-Mystery Comics, published by Ace Magazines, was in print for nine years from July 1940 to July 1949, never really maintaining a consistent publishing rate. Although the series was entitled Super-Mystery, the Super and Mystery seemed to be pushed during separate eras with the first twenty-nine issues featuring Magno, the Magnetic Man on the covers and containing various other superhero tales while the later issues featured such characters as Bert and Sue, Mack Martin and The Unknown with more of a mystery/horror vibe to the covers than superhero feats.