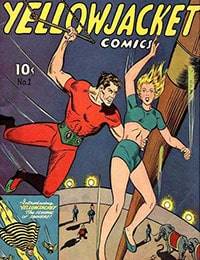 Yellowjacket starred in his own title, Yellowjacket Comics, which was published for 10 issues from 1944 to 1946. There was no artist or writer credited for the stories. These ten issues were published by E. Levy/Frank Comunale, they ended their experiment with comics with #10 and years later a new company called Charlton bought the rights to the title, but never used it. When the title was renamed Jack in the Box, Yellowjacket appeared in the first issue, #11. He also appeared in TNT Comics #1, which was published by Charles Publications.